Click on the full screen button for complete immersion

Doritos latest ad campaign allows fans to interact with their brand through music, and they chose 360° video to immerse viewers in engaging experiences from talented musicians around the world.  The UK's Professor Green provided a specially written track, "Coming To Get Me", to accompany one of several 360° videos created for the campaign.

For the full experience, visit http://www.doritoslatenight.com/

This 360° video is ground breaking on a number of levels.  First, it's on YouTube.  I don't know how often YouTube allows for a custom player to play custom content of this sort, but Sarah Perez of ReadWriteWeb found that noteworthy.  The player comes from yellowBird, who has produced a number of well-received 360° video projects over the last two years.  The player, which is an embeddable widget, allows for easy navigation of the 360° content, full screen button, social media sharing options, and an "unwrapped" version of the video with the 2D button.

YouTube is the internet's biggest video distribution platform and acceptance of yellowBird's 360° video player there opens many doors for the Dutch startup and strengthens their position as the leader in the medium. 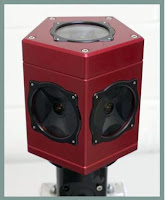 Also ground-breaking here is the resolution of this video.  This is one of the first productions I've seen using Point Grey Research's Ladybug 3 camera, which provides significantly higher resolution despite a reduced frame rate.  The production was apparently shot by Transmission TX in London, who have posted a number of production photos at their site of the swanky camera chair they have developed.  Outfitted with LED lighting under the Ladybug 3, as well as an operator and the necessary hardware, the action was directed around the chair as it moved through the set in one continuous take . 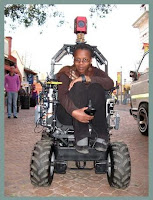 "Coming To Get Me" has probably the highest production value of any 360° video made to date.  The set was built specifically for the medium and considerable effort was made to stage a performance that fills the sphere of view with something worth watching...hot zombie girls! 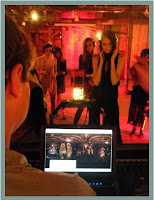 Additional components of the effort include a Rihanna Augmented Realty music video that is "unlocked" with an AR code found on a bag of Doritos Late Night chips.  The "Late Night" campaign is Doritos' first ever global promotion and was created out of Goodby, Silverstein & Partners with AMV BBDO, who recruited director Chris Cairns.
A job well done from all of the creative teams involved that is sure to sell a bag of chips or two, but more importantly, leave a lasting impression on anyone who interacts with it.
Here is the behind-the-scenes video from the making of Professor Green's "Coming To Get Me" 360° Video:
Posted by UnderCam at 5:02 PM