NYC Gets Immersed in Texas

To show a side of Texas that too few get to see, Texas Tourism and the Governor's Office of Economic Development and Tourism have employed a 360° video exhibit for it's Texas On Tour (TOT)traveling promotion. Last week, TOT's dusty trail was in New York City, giving residents of the Big Apple a realistic experience from several Texas waterways. Potential visitors from NYC climbed into kayaks and put on head-tracking video display systems to become immersed in 360° videos from locations around the state.

Running the rapids of the Rio Grande River in the depths of the canyons of the Big Bend region, virtual visitors of the Texas on Tour experience traversed the line between the US and its southern neighbor, Mexico. In the Gulf of Mexico, they virtually explore the Corpus Christi coast, visiting historic aircraft carriers and getting to see, first-hand, the surf of America's "Third Coast". Among the Spanish Moss covered Cypress trees of Texas' only natural lake, Caddo Lake, virtual visitors enjoyed an adventure typically reserved for its most adventurous residents. With 360° video delivered with head-tracking HMD's, participants could look in any direction and see the scenery passing by exactly as if they were actually there.

From exit surveys, the promotion was a huge success because it improved the New Yorker's perception of Texas as a travel destination by 22 percent. A natural application for 360° video, such destination promotion campaigns benefit hugely by taking potential visitors exactly where they want to go and delivering an exceptional experience. Now, Texas Travel simply needs to put these experiences online via available Flash players, so that those of us who weren't lucky enough to be near a Texas On Tour exhibit can check out all we don't know about the Lone Star State. I mean, I want to see Caddo Lake, too. Until then, here's a photo of NYC residents getting immersed in the Texas On Tour experience to give you the idea: 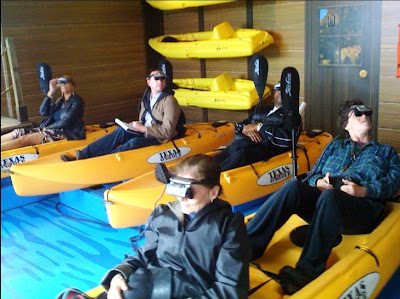