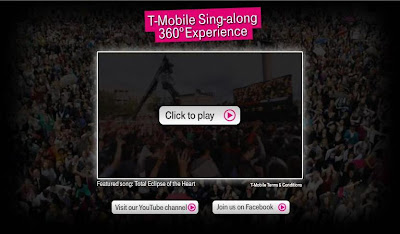 A couple of days ago, Tech Crunch had a piece about yellowBird, the Dutch startup employing LadyBug 2 cameras from Point Grey Research. Glad to see so many comments in favor of the 360° video platform, I chimed in on the discussion and mentioned that I had not seen much from yellowBird since it's initial demo was released last January. Well, thanks to another commenter, I was pointed to T-Mobile's Sing-Along 360° Experience. This is just good fun.

Apparently, the team at yellowBird were invited to Trafalgar Square by Saatchi & Saatchi London to shoot this T-Mobile brand-affirming event. 13,000 people gathered to sing Bonnie Tyler's "Total Eclipse of the Heart" in front of a larger video display of they lyrics. This sort of branded flash mob sing-along has been quite popular with the people in attendance, on YouTube, and with T-Mobile as a way to connect with customers with little fun. It's great to see a company like T-Mobile wanting to take the concept still further. By documenting the event in 360° video, they gave the rest of us the opportunity to see and hear what it was like in the crowd.

It's also great to see a renowned creative team like Saatchi & Saatchi continue to bring 360° video to its clients. Saatchi & Saatchi teamed up with Immersive Media earlier this year on it's work with Armani Jeans in a guided 360° video brand experience for its new website.

Congrats to yellowBird on garnering significant attention for their work with 360° video. Apparently, the TechCrunch article (spread widely on Twitter) drew enough interest to overload their servers this week, those are growing pains that I'm sure they are happy to deal with. Here's the video that got people talking. 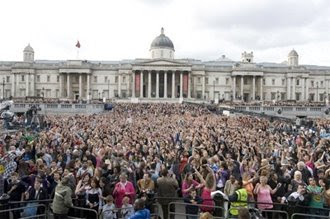