The YouTube video above describes RealityV, a 360° Video platform built by InVism, a simulation and visualization services company, in partnership with EffectiveUI, an award-winning user experience design and development agency.

The project effectively employs 360° Video in a "Choose Your Own Adventure"-style training program for US Military personnel to put them into photorealistic experiences that they are likely to encounter overseas and aid them in effective and culturally-sensitive decision-making. Deployed as Army 360: Immersive Cultural Simulation the RealityV platform also incorporates "emotionally charged high-definition video" in combination with 360° Video. Marking the first publicly discussed use of actual actors, scripts, and production values for a 360° Video project, Army 360 appears to be a highy effective training tool.

You can see a rather long and slow to load trailer for the project here. Below is a simple screenshot from the trailer. 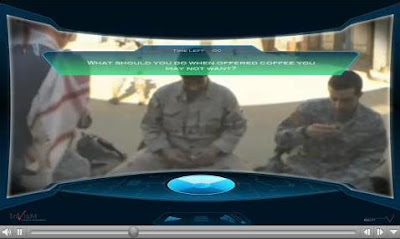 The project won a Stevie Award in the "Interactive Multimedia - Training" category from the American Business Awards according to Fox Business News on July 22 in New York. Read the full story here.

It is worth noting that the 360° Video content seems to have been captured with a GoPano optic from EyeSee360° on an HD video camera. This is the first time I've seen a project use this single-sensor system, and I am intrigued.

Congratulations to InVism (formerly Intelligence Gaming), EffectiveUI, and The US Army on an innovative and effective program that will saves lives, both military and civilian. I, for one, hope to see much more of this type of focused effort to create engaging, educational, and entertaining projects in the powerfully interactive 360° video medium. 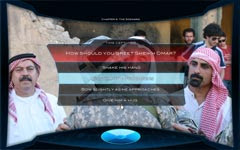