Finally, a 360° Video with a STORYLINE 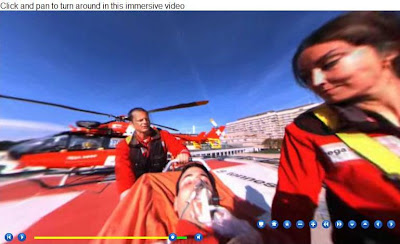 GlobalVision Communication, a Swiss company, has produced a 360° Video using a LadyBug 2 camera from Point Grey Research that follows a REGA (Swiss Aerial Rescue Guard) helicopter team through the operation of a helicopter rescue from scramble to primary care delivery. Although there are some obvious issues, it is an extraordinary experience for the viewer from start to finish.

You can join the crew onboard the helicopter here.

So here's the good, the bad, and the ugly.
The Good: 1. There is a sequence of events in a logical order, it's not much to ask for, but it is the first time I've seen a 360° Video online that makes the attempt. 2. The "story" is told from a number of positions. First you're in the pilot's seat, then you're on the back of the rescuer being lowered to the victim, and then you're on the victim and seeing the rescue from that perspective. The transitions are orderly and make sense in relation to the story. With the camera they are using, these changes aren't easy to make, but the producer pulls it off here.
The Bad: 1. Load time - There's no counter on the player, but this is one of the longest 360° Videos on the internet to date. So it takes a long time to load - totally understandable, but worth noting. 2. Poor Quality video - again understandable considering sensors, format, and bandwidth considerations, but worth noting. 3. Stitching issues - Viewers will notice areas throughout were things just don't line up all the time. I'm not saying it distracts from the experience much, but it's there. All 360° Video cameras suffer from an issue called parallax that is especially noticable when objects are in close proxity to the camera.
The Ugly: The player and player window. Great to have a fullscreen option and when in fullscreen the controls aren't quite as annoying, but I'm not a fan of having player controls on top of content. The seperate window in which this video opens doesn't even have a url that I can point to for this blog. There is no embed code or any other means of sharing. No need to hide this stuff guys.

My review: Considering this is the first story told (online) in 360° video, I give it my highest rating.

My Suggestions: Less Music and more narration, maybe even someone speaking to the viewer. Tell us what is going on, what to look at, etc. Guide us through the experience.
Posted by UnderCam at 3:26 PM