There have been a lot of concerts shot in 360° Video and it's always pretty cool, but MATIvision (Multi Angle Totally Interactive Vision) has ROCKED me with their GUI and it's seamless integration of multiple LadyBug 2 cameras. 2009 is turning out be the year of MATI (formerly known as iam-360.com) as they have been out shooting concerts and festivals across Europe. Their 360 Video pages must already surpass even Immersive Media's demos in terms of sheer quantity of content online. With four camera streams associated with each song from each band in the line up, the shear quantity is astounding.

If you are a fan of live music, do yourself a favor and check this out now! 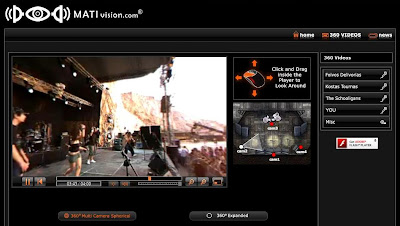 Say you spot a "person of interest" in the front row or on stage. In 360° Video, you have the power to aim your POV directly at that person and zoom in for a better look. It's likely though that the person you are interested in seeing closer is too far away from the camera for a good view. In MATIvision's setup, you can simply switch views to another camera closer to the person of interest, or maybe even a better angle. 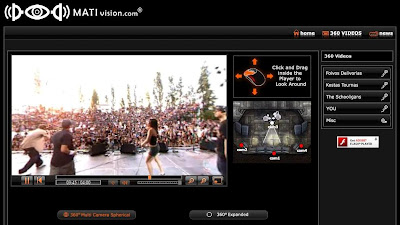 MATIvision is an amazing example of what a focused effort in any one of the thousands of applications of 360° Video can become. Congratulations, MATIvision, and thank you for giving us the best seats in the house.