Yes, video is better than still imagery. Yes, Google Map's Street View started out as Immersive Media's 360° Video. Yes, Google had good reason not to invest in the bandwidth that Street View in 360° Video would have required when they rolled it out in the spring of 2007. All of this is true, but what if a Street View-like application was launched using 360° Video instead of still imagery? What would it look like? How should it be implemented?

"Clearly no one would want to sit through a twenty minute video to prepare for a twenty minute drive...", states the narrator, who goes on to describe how a logical user interface has been built with the ancient secrets of common sense and fast forward.

Microsoft's application, as described at the ACM event, User Interface Science and Technology (UIST) 2009, and titled Integrated Videos and Maps for Driving Directions, provides an excellent visualization that will help us avoid getting lost on the way to our destination as much as Google Maps Street View has been helping us recognize our destination when we have arrived.

Score one for Bing. 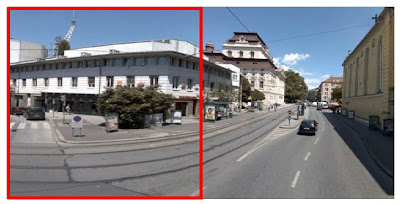 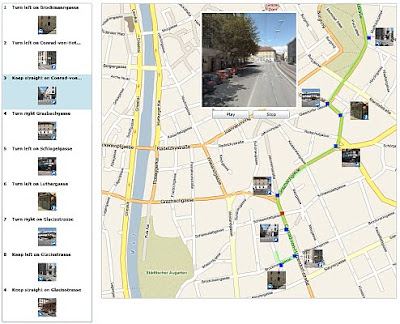 Due credit for authors Billy Chen and Boris Neubert and Eyal Ofek and Oliver Deussen and Michael Cohen
Posted by UnderCam at 11:20 AM