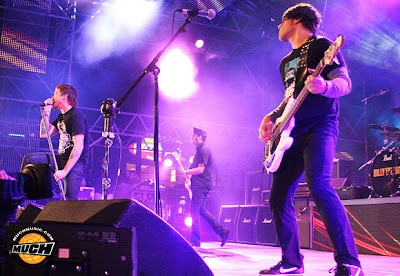 Something happened in the world of music yesterday that just may have changed everything.

In celebration of Canada's Thanksgiving, MuchMusic held another of its Live in the Lot concert series near its offices in downtown Toronto. Featuring Canadian rockers, Billy Talent, this concert was free to anyone over 14 years old and owned a Rogers Mobile phone. It was broadcast on CTV's MuchMusic, but it was also broadcast LIVE online in 360° video so the online viewers had a seat on stage between lead singer Ben Kowalewicz and bassist Jon Gallant.

With Immersive Media's 360° video camera visible to TV cameras on stage and multiple references to MuchMusic's Live In The Lot 360° website, viewers were able to tune in for a look around on stage for the entire hour long performance.

The experience was really very cool and marks the first time an event of any magnitude has been streamed LIVE in 360° video. Here are some screen grabs from the 360° camera mashed to some twitter posts it garnered and quotes from the show:

@justinerdman: My friends @muchmusic have THE coolest 360 degree video streaming happening here: http://bit.ly/72wGh for the Billy Talent Live In The Lot!

@ThatsSoLope: Dude the 360 camera for the Billy Talent show is insane! Sooo cool

Ben Kowalewicz gets up close and personal with the online audience, "This is a 365 degree camera aimed right at my crotch. It's a World Wide Ball View!" Days in a year...Degrees in a circle...whatever...Thanks for the shout out, Ben.

So, that's the good stuff. Now, here are the bad and the ugly, because there is always room for improvement, people. The stream was mentioned to be freezing on many users' computers, probably low user bandwidth, but still. The sound was really pretty bad for a music show, although that could just be Billy Talent's music, I'm not really sure. The new Immersive Media live player rolled out for this event is an excellent experience because it shows the full image available to the viewer while focusing on the viewer-selected portion, and it has the much needed full-screen option. The only problem there was that the full screen option highlights the poor resolution and becomes a bit sticky when navigating.

All in all, this show was a break-through that can only be matched (and possibly surpassed) by having multiple 360° video cameras on stage and in the crowd at an event that the viewer can choose between (See MATIvision Rocks!)
Congrats to MuchMusic, Immersive Media, Billy Talent, and Canadian Music fans for an incredible online experience.