There have been some extraordinary 360 video projects lately from NorthStudio360’s Nimmo Bay Experience, which has gone organically viral with 25 million views, to Craig Werden’s surreal “Are We” concept music video.

If it doesn’t quite seem like 360 degree, interactive video technology is showing up everywhere yet, it just might after tomorrow night's 83rd Academy Awards.

from https://oscar.go.com/my-oscars/all-access"Oscar All Access is a new premium service that gives Oscar fans the ultimate view of Hollywood's biggest night. Beginning with the Red Carpet, and continuing through the Governor's Ball, Oscar All Access members will get unprecedented, behind the scenes access and see the event like never before. With exclusive access to our groundbreaking "360 cam" technology, members can direct their own Oscar experience with just the touch of a mouse."
[UPDATED 2-27-2011]

"It's like standing next to someone," said BigLook360's CEO and founder, Lance Loesberg. "You're right there."

I've blogged about some of Lance's work at BigLook360 before, both their excellent Travel Texas project and their recording of the Implosion of Texas Stadium. This time, they've landed the ultimate proof-of-concept project. The right clients, audience, and expectations, I think, will combine here to push the 360 degree, spherical, immersive (official term yet to evolve) video medium over the summit of critical mass awareness. It has been a long climb up, with several dangers along the way, but 360 video (the term I've settled on here) is almost there.

The new Lexus car ads are touting "a virtual 360 degrees of video" around their cars. Trust me this feature is awesome while driving. When I was on the road shooting content for Google StreetView with Immersive Media's Dodeca camera on the roof of the car, I could keep the viewer control pointed at my significant blind spot in the VW Beetle we drove (this was mostly due to the equipment in the back seat). As we drove, we also talked about how helpful the video would be if we had an accident. Sony has already produced the first consumer 360 degree video camera in the Sony Bloggie, and mobile apps from such mega-stars as the Black-Eyed Peas are featuring 360 video content. Now, with an all access pass the second biggest TV broadcast of the year available online, producers will find the perfect compliment to any live event. 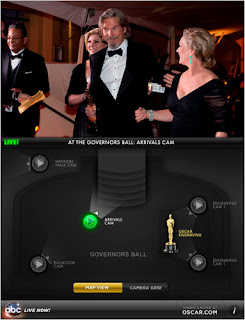 So, what will Oscar All Access look like? Well, it seems that like MATIVision's Muse Concert at Wembley Stadium, the viewer will have a group of 360 cameras to choose from in addition the ability to look around in each camera position. Celebrities that seated near these camera's will get full-time camera time.

What kind of cameras will they be using on Oscar night? According to the press release that was picked up by the Associated Press and further distributed, "Inside each [camera] are 11 separate cameras feeding a constant stream of video online." The only 360 video camera out there (only two types were ever sold commercially) that functions on an eleven sensor array is the Immersive Media Dodeca 2360. Big Look 360 was a client of Immersive Media, working with their cameras on several projects (see links above), but where are they getting six Dodecas for this project?

The reason I asked is that Immersive Media still has a website up, but is no longer an ongoing concern as the company changed its name and business focus (to "clean" coal investments, of all things) last summer. I know. I was an employee of Immersive Media until they suddenly pulled resources from the company to invest in energy sector enterprises. The marketing department was laid off/fired as well as several others in January 2008, at the extreme height of the global economic collapse, followed by round after round of lay offs of key positions in a very small business, until finally, change came to Immersive Media in June 2010. Everybody was let go and the doors were closed at the offices in Portland and Dallas. 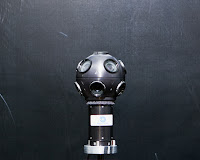 The new company, Emberclear, has now resumed trading on the Toronto Venture Exchange and recently thanked two departing board members, Geoff Rhoads and Winston Guillory, who helped guide the company through its transition stating, "Both directors have been champions on behalf of our shareholders with their ability to embrace the facts and accept the logical conclusions no matter how difficult." Logical conclusions? What were those? Were they published? According Emberclear's own documents where it has repeatedly stated that the "camera business" has been undergoing a "strategic review" and all operations have been discontinued. No conclusions from this review have been revealed to investors in Immersive Media Corporation (now Emberclear) whose share value was significantly diluted in the awkward, year-long transition. The regulators who approved the transition might be interested to know what this Oscar announcement from Big Look 360 seems to indicate, that it is still doing “camera business” with Emberclear/Immersive Media. Something fishy there.

In fact, one would guess that since Emberclear has so publicly devalued its own "camera business", Lance Loesburg and Big Look 360 must have gotten a great deal on the six Immersive Media cameras they'll be using tomorrow night . 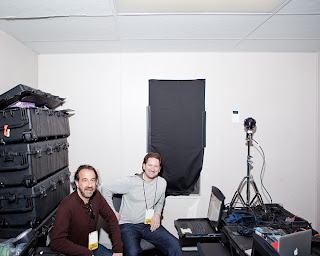 A great deal is about the only reason I can think of for Big Look 360 to use Immersive Media cameras on this project. Compared to commercially available Ladybug 3 cameras from Point Grey Research, the resolution of the now ten year old design of the Dodeca is terrible, with its eleven sensors being only of VGA quality. Resolution will be key to spotting celebrities and digitally stalking them. Ladybug 3 cameras have recently been used for tests on NASA's new Mars Rover, Google's Art Project, and even the new companies that Immersive Media's former CEO has started, Immersive Ventures and 3D360, which is a partnership with Edo Segal and Will.i.am and built the BEP360 iPhone app. It was used in the first 360 video on YouTube, Professor Green's "Coming to Get Me" which also has iPhone app for Doritos' multi-million dollar "Late Night" campaign. It is surprising that with an ultra-high profile event like the Oscars, Big Look 360 would not choose to use the current state of the art and resolution standard. Then again, this is a proof-of-concept project and a deal is a deal, and who knows, the curtains may drawback tomorrow night and we'll see six Ladybug 3 cameras around the venue.

Oscar Night's All Access "Invitation" will cost $4.99, and I think they have the right price point for this. My only question is in the complete exclusivity of the service to only paying customers. This is a new medium that most people have never experienced and you want them to give it a try, right? Give them a little taste... Open up one camera for free, and the content and human curiosity will sell many more subscribers. Once viewers have had a chance to explore a live event like this, they will pay five bucks to get five more camera feeds.

While I usually join the hundreds of millions of other viewers on Oscar night, I DVR it and come back later. I have to admit that this news gets me really interested in watching the live broadcast. They'll get my five bucks on Oscar Night, will they get yours?

[UPDATE]
John Lasseter, a member of the Academy, creative officer for Disney and Pixar, said: "It's going to give the viewer at home more access to the Oscars ceremony than even people going to the Oscars".
from http://www.wired.co.uk/news/archive/2011-02/25/oscars-360-degree-livestream