yellowBird, the busiest 360 video production company alive today, has done it again, and this time, they've done it with serious style.  Fashion icon Louis Vuitton tapped the Netherlands-based team led by Marc Groothelm to bring the world to the front row of its Fashion Show at Paris Fashion Week 2011.  According to The Telegraph:

"Widely said to be a "money no object" event for the multi-billion pound French luxury brand, the show was staged in a massive black tent in the courtyard of the Louvre Museum, with a cast of saucy French maids with feather dusters, four hotel doormen, and 67 models, including Kate Moss and Naomi Campbell.  The models were ferried up to the stage in four gilded elevators, inspired by those in Claridge's Hotel in London."

The user experience is almost as elegant as one would imagine the actual experience of the show was.  Once at the website, a full screen time lapse video begins panning the courtyard at The Louvre as the enormous black tent is erected. Upon entering the website, the user is provided with three options: Sit in the front Row, Watch the Show with [Designer] Mark Jacobs, or Enter the Insider's Experience.  Sit in the Front Row is an incredibly immersive, 12 minute experience of the Fashion Show itself.  Sitting in the front row, with the ability to watch the models from all angles as they file by is (almost) as good an experience as actually being there.

Watch the Show with Mark Jacobs is traditional video footage of the desginer and assistant watching the Fashion Show and providing detailed commentary on the designs.  When you click on Enter the Insider's Experience, you'll be asked to login to Facebook and "Like" the Louis Vuitton Facebook Page in order to get the Insider's content, which begins with another 360 video.

This time you are outside in the Louvre Courtyard again, walking through swaying, black balloons towards the enormous black tent.  You realize almost immediatey that you are being given the actual visitor's expereince upon entering the Fashion Show.  As you enter the shadowy halls, the audio of the show's last minute preparations fill you ears.  You pass through an empy hair and makeup area full of mirrors and the sounds of the dressing room during the show make a sharp contrast.  A label appears in the middle of the screen, unmoved by clicking and dragging.  When moused over, an HD video from behind the scenes in the dressing room begins.  Each of the scenes throughout, have additional content embedded into the 360 video.

This is another brilliant use of 360 video that yellowBird has been employing lately, as a container for a larger media package.  It's a logical layout and one that is intuitive with hotspotting and linkage. 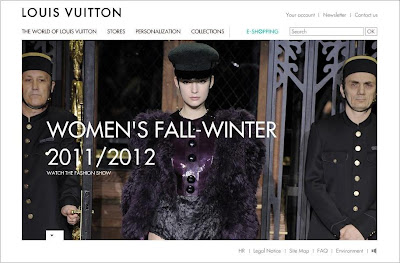 Over all, I think Louis Vuitton will be winning website awards up and down the internets with this online experience and yellowBird is slated to release a number of new client works in coming weeks. 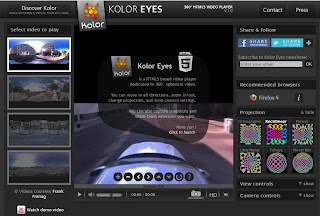 Can't wait to see what the future holds, but with Kolor announcing the launch of their own 360 degree video player requiring no plugin through WebGL and HTML5-based browsers, yellowBird seems to realize that staying on top is not going to be easy.

Congratulations to all involved on this incredible project!