"Standard" Video from the event is not 360, but provides a great comparison with the 360 experience.


﻿ ﻿
It is not the first 360 video that yellowBird has placed on YouTube, but it is the first to show off their new hotspotting linkage to more video experiences.  LEXUS choose yellowBird to document their Netherlands launch part of the new LEXUS CT 200h, the world's first full hybrid luxury compact vehicle.  Document they did.

﻿ ﻿ The project is home to at least eight different 360 video experiences, each accessible from the same YouTube page via the "L" icons placed around you from the start of the first video.  As you click and drag to look around you, you see that you are in the middle of the event from the start.  Before you, graphic projections dance across the facade of Chateau de Saint-Germain-en-Laye and the new Lexus appears in the foreground illuminated by the light show.  To your right, a small lit up tent seems to be where the pulsing drumbeat supporting the show is eminating.  You click on the LEXUS icon above it and are taken inside the little tent to a viewpoint right on the drummer's set.  With the 360 control, you can watch the drum solo rain down on the skins all around you.

﻿ ﻿ You have to back out to the previous video to proceed here, which I think is a flaw, but a very small one.  The next icon you find in the original video leads you inside the big tent, where the party is going on. 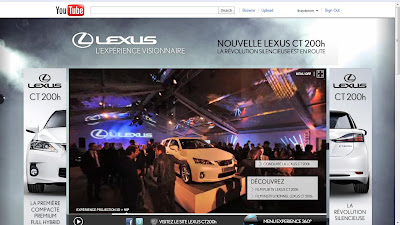 There you are, in front of the showcased CT 200h.  Lexus icons becon you to explore more.  One sits above the car and one in the distance above the stage.  Clicking on the car icon, you are taken for a drive down a European country lane with a beautiful driver.  If you've ever tried to shoot video inside a car in the daytime, you know that contrast between light inside and briter light outside can be difficult, but the yellowBird shooters found a way around that with their new camera from Point Grey Research, the Ladybug 3.  The experience is extremely immersive here. 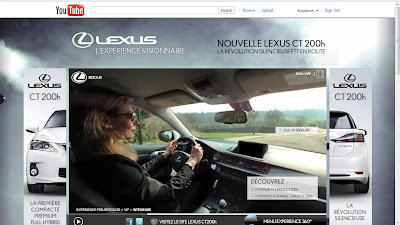 There is even an option to go outside the vehicle as it drives down the lane.  Clicking "VUE EXTERIEURE" will place you on the hood of the car for the drive.  Clicking "RETOUR" will take you back to the party to check out the live music from Medi.  They start the set with the first single, "How Would You Do It?" off the new album, You Got Me (Moving).  The camera is well placed between the act and the audience, allowing you view whatever you want.  Like all 360 videos from music events, the online viewer should have the best seat in the house.  There is also another tune option, "Like a Runaway" to explore. 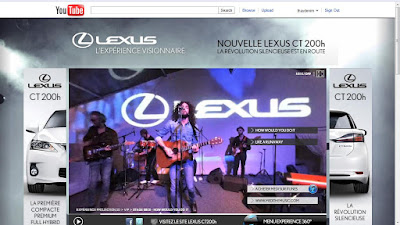 All together this LEXUS project by yellowBird for YouTube is one of the most immersive online experiences yet, will likely turn the heads of marketing executives around the world, and maybe even collect a few web awards.  All involved certainly deserve too.

As an immersive video evangelist, I do have some criticisms of the project, however.  First of all, this project has a limited field of view in that the viewer is blocked from looking straight up and on the initial home video, this design decision has consequences.  The very top of the beautiful architecture of the Chateau is cutoff, giving me the sense that I can't really see everything including the very top of the amazing visuals that the project is build around in the first place.  Dislike.  My second issue is less severe, but odd none the less.  For some reason, when the viewer pauses the video (say to grab a screenshot) the 360 navigation becomes locked and the LEXUS icons disappear.  Both of these issues are new to yellowBird projects, and I hope they don't represent a trend.

When Immersive Media demostrated its live streaming 360 video capabilities, it reduced the zenith view in order to save on bandwidth for the stream, essentially determining that the view above the camera of the ceiling wasn't worth the transmission costs.  Personally, I think it is the freedom of movement that engages the user and the zenith is a big part of that, it's another whole dimension to explore.  Removing it didn't work for the now defunct Immersive Media and I don't think it works well here.

One reason yellowBird or LEXUS may have made this design decision is to aid first time users of the 360 video, who do tend to get lost around the zenith view as they learn the navigation controls.  There has long been a learning curve to this new medium, and for some, like my mother, it is simply too steep.  As a large commercial project, the reason would be understandable, but with many very inexpensive 360 degree "cylindrical" video technologies emerging, yellowBird may need to brand their offering in contrast to the cheap stuff.

More to come in the next post about some of those very cheap options for 360 video coming online, but here's a new one that has received a lot of attention today, which is good, because they are depending on crowdsourcing the development via Kickstarter.com - http://kck.st/hAJdUX.  Considering that GoPano is already 15% to their goal in just half of the first day bodes well for the project.  You might want to consider backing it, you know, since you're reading this blog and all...

BTW, thank you for reading.
Posted by UnderCam at 2:15 PM