360° Video of the Day: Among Giants: An Immersive Experience with National Geographic

Today's 360° video holds a special significance for me as it represents an incredibly complete documentation of the most amazing experience of my life.

In late summer 2007, National Geographic's Crittercam inventor, Greg Marshall, invited Immersive Media to join a research team in Southeast Alaska and document the deployment of Crittercam on to the backs of humpback whales in 360° video. 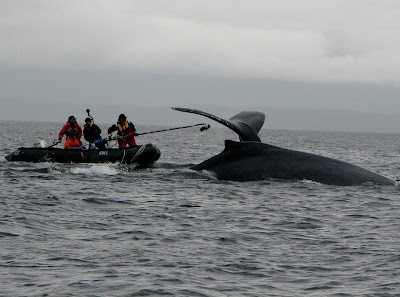 Craig Adkins and I got the assignment, but had little idea of what we were in store for. We would be aboard an 18ft inflatable boat for up to ten hours a day in the cold and wet Southeast Alaskan marine environment, while getting up close and personal with some of the largest creatures on earth. As a former whitewater rafting guide, I'm pretty comfortable around inflatables and the water, but the idea of attempting to reach out and touch something so powerful, which would be necessary to attach the Crittercam to the whale, both intrigued and intimidated me.

National Geographic's Crittercam has been providing wildlife researchers with a window into the worlds of their subjects. In the case of the humpback whale in Southeast Alaska's Chatham Straight, researchers with the Alaska Whale Foundation study the unique feeding behavior that these whales employ here and nowhere else in the ocean.

Dr. Fred Sharpe uses the term Social Foraging to describe the cooperation observed between the whales when they corner a large school, or bait ball, of herring against the surface of the water. Their prey is further restrained with a constant and deliberate stream of air bubbles blown by the lead whale as it swims a tight circle around the fish. The herring will not swim through the curtain of bubbles as they travel to the surface. Once the "bubble net" is closed in a circle and arriving at the surface, all of the adult whales in a group will come together and swim to the surface, opening their enormous jaws and breaching the surface at exactly the same moment to swallow the sea out from under the herring. Moments before the whales "lunge" at the surface, the seagulls overhead will concentrate on the location of the bubble net, the whales' high-pitched song fills the air, and a mountain whale maws erupts as silver herring scatter through the whitewater. 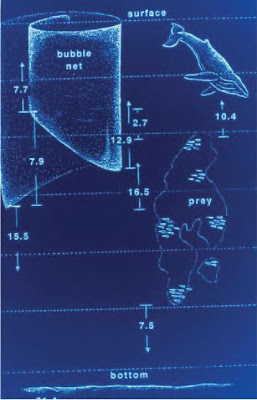 Dive, organize, lunge, regroup, dive...every fifteen minutes this feeding routine cycles, over and over again, day and night (for there is little difference here during the summer) for a month. Hundreds of tons of fish are consumed and the humpbacks pack on reserves for long months of migration across the sterile open ocean. The population of humpback whales that visits these quite backwaters of the northern Pacific each summer are the only humpbacks in the world known to feed this way and the Alaska Whale Foundation needed the Crittercam footage to learn more about how the animals are organizing underwater.

The strategy for deploying the Crittercam onto a whale's back was to follow the group at a safe distance until they lunge on a school of herring and then race in while they are at the surface catching their breath and regrouping toward the next feeding. Time and again, attempts were made, but each time the nearest whale would avoid us nimbly at the last moment or Dr. Sharpe, whose research permit allowed such close proximity to these endangered marine mammals, would call off the chase, not wanting to stress the animals to the point that they would stop their feeding and miss out on critical resources. "It will happen," he said after each failed attempt while watching the tails or flukes of the whales disappear as they dove again. Indeed, it did happen eventually.

Everything finally did come together as Dr. Sharpe motored the boat among the giants and audio researcher; Sean Hanser readied the suction needed for Corey Jaskolski's Crittercam cam at the end of the long deployment pole. Like an Inuit hunter, Corey steadied himself as one whale approached the boat from the port side. When the whale's dorsal was within feet of the four of us, he gently dropped the Crittercam onto the whale's back and the suction running through the cup clasped it tightly tot he animal before disappearing below the bow. Scanning the surface for confirmation that we had managed a successful deployment, we spotted the whale as it came up for its next breath. The Crittercam was there attached like the remora fish on which its design was based. The researchers would have more video data to analyze and a bit more about these amazing creatures would be brought to light. 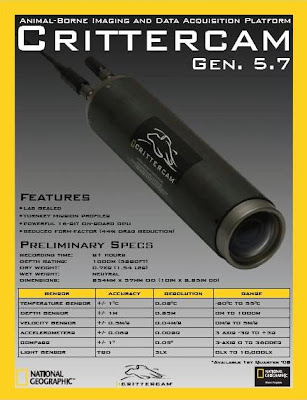 The Crittercam provides more than just great imagery, though. Also onboard its waterproof housing are sensors for recording depth, temperature, and velocity, as well as an accelerometers and a compass. All providing the researchers with deep knowledge about the journey it takes with its host animal, but only if it is recovered.

At a pre-programmed time, the suction on the cup is released and the Crittercam floats to the surface with its delicate radio frequency antennae pointing up. The team tracks it with radio telemetry and can tell by the signal that is has come off the whale. Finding the little data package on the surface of the water can still be very difficult in the flat evening light of the northern latitudes.

It was right after we recovered the Crittercam that we were rewarded with closest whale lunge of the trip. We were sitting quietly talking about the adventure of the day when the first bubbles hit the surface right next to the boat. The eerie song from the deep called out just as the quiet was shattered by the five leviathans lunging for another meal within ten yards of our raft. This time we didn't need to rush in, but could just stand there and watch with our mouths, too, wide open.

All of the experience I've described here was documented in 360° video over the three days we were with the humpbacks of Chatham Strait, and much more. Let's just say that there is a whole other story about the Alaskan Brown Bears of Chichagof Island that got up close and personal with the Immersive Media 360° video camera. 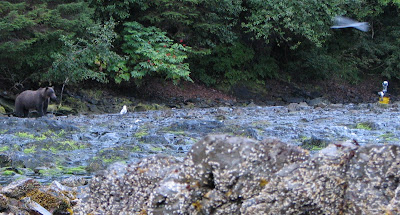 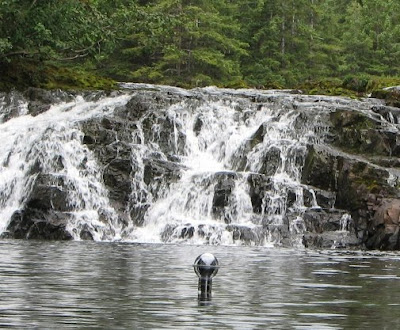