Three different 360° videos for you to explore today that will take you on an exclusive helicopter tour over Mount St Helens and its blast zone created by the massive eruption in 1980.

Created last year for the United States Forest Service by Immersive Media, these short edits were taken from a larger GIS project in which Immersive Media comprehensively "video mapped" the area while testing a prototype helicopter mount for their camera that was custom designed in Portland, OR. 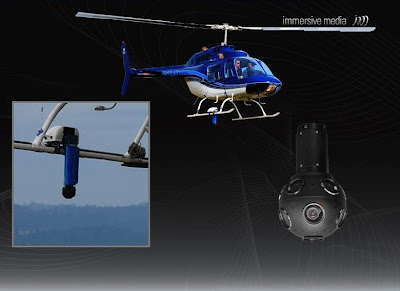 30 frames per second 360° video was captured by the Dodeca 2360 camera and the GPS coordinates of the helicopter's position were imbedded into each frame of the video. Rendered together with detailed maps in Geographic Information Systems (GIS) software, the project will provide a user detailed visual information of any area that the helicopter passed over. By simply clicking anywhere on the path of the helicopter on the map, the user will be pull up the 360° video from that exact location, be able to look around from a view point below the helicopter skid, zoom in on an area of interest, and control the video play from that point. 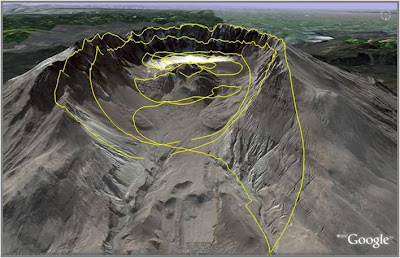 With a comprehensive flight plan, the entire National Monument land area was efficiently documented in this manner. In dynamic landscapes such as the interior of the crater, the imagery captured in this project will help volcano researchers determine change over time in areas of interest, like the volcano's growing lava dome that has split the crater's glacier into two lobes.

360° Video Maps like this are the future of the online virtual tour and the race is on for the first provider of 360° video to release a functional application that has both exceptional user-interface design and a distribution model that makes sense. Map data need not be restricted to GIS level, but an application should also be versatile enough to function well when positioning from GPS and other sources aren't available, such as indoors. In those cases, visual acuity is sufficient to identify the position the camera was in when imagery was recorded on a floor plan or artist drawing. The application should allow lines to be drawn to indicate the route taken by the camera through a building interior. An application to incorporate 360° video with a floor plan or map would elevate the medium to a position as a useful tool over a visual novelty.

Immersive Media describes such an application as "coming soon" on its website, calling it IM OnScene. I know, because I wrote and narrated the video that describes it (not my best work, but it was tough to get excited by video of a grade school and the benefits to first-responders instead of the bigger picture applications like online destination marketing). That video went up publicly on the Immersive Media website almost a year ago, but there has been no publicly released usage or testing of the IM OnScene application since.